Several months ago I had the opportunity to talk with some of the key players in the new movie Halfway: writer/director Ben Caird, producer Jonny Paterson (twice), and actor Quinton Aaron (also from The Blind Side). The film is out now—to much acclaim (including winning Best Feature Film at the Julien Dubuque International Film Festival)—and I finally had the chance to see it! While I’m not a movie reviewer and definitely not a movie critic (I don’t like to be a critic, really, of anything), I’m delighted to have the chance to share my thoughts on a truly excellent film.

Quinton Aaron (The Blind Side) plays a recently released convict who finds himself trapped between his urban criminal past and his new life on probation as the only black man in a conservative white Wisconsin farming town.

I’ll begin with the cinematography (by cinematographer Benjamin Thomas). (Note: because, as I said, I’m no film critic, I decided to look up “what is cinematography” to make sure I knew what I was talking about. I found a good answer here: the cinematographer “makes every creative choice related to composition, lighting, and camera motion—anything that audiences can see in a given shot.” I assume this is done in collaboration with the director.)

Well, cut to several years ago when I worked at a not-for-profit organization that has an annual Gala event. One year, as often happens, staff who were attending were interspersed amongst guests to fill empty spaces at sponsored tables. By chance, I ended up at the table with the owners of the winery that had donated all the wine for the event. We drank some of the wine they’d provided to everyone, but, much to our delight, they also provided our table with a couple of $100 bottles of red wine.

Maybe you, dear reader, drink $100 bottles of wine all the time. I, however, did not, and still do not. Before I tasted that $100 wine, I assumed wine was wine. That first sip, however, opened my eyes—and my taste buds. The wine was smooth, creamy, delicious in a way I did not know wine could be delicious. The wine was a revelation.

Mind you, the movie was filmed on location in Montfort, Wisconsin. A place which—no offense to Montfort—is not known for the sweeping vistas of, say, Hawaii or the Grand Canyon or Iceland. Which made the cinematography that much more spectacular and impressive, frankly.

The richness of the cinematography also made me think about the difference between a Hollywood blockbuster and a small indie film. In Hollywood, the idea frequently seems to be that if you throw enough money and visual effects at something, that will hide all imperfections. With a smaller indie budget, there’s nowhere to hide. To do so much more with so much less is absolute talent, and in this Benjamin Thomas demonstrated exemplary skill. There is a raw, pure poignancy to the visuals in Halfway that reminds you: this isn’t a dream created in someone’s mind. This is real, this is our planet. This is something we can connect to on an authentic and visceral level, whether or not we actually know the area.

At any rate, I could recommend the movie for its cinematography alone.

Next, the writing. I’ll divide this into two components: dialogue and plot.

As a writer I am all too aware that writing believable, natural dialogue isn’t as easy as it seems. Not too long ago another indie movie was getting a lot of buzz, so I found it on Netflix and gave it a try. The premise seemed interesting, but the dialogue was awful: forced, cliched, unnatural. The actors did their best but everything felt stilted and uncomfortable. I couldn’t bear it, and gave up on the movie after about ten minutes.

In contrast, Caird’s dialogue is so natural as to make writing it look easy. With only a few exceptions throughout the film, the dialogue felt so consistent with character and with how people actually speak that it almost never felt “written”—the highest praise. This kind of writing is a gift to the actors, who then had a solid foundation on which to base their characters and make them truly come alive and feel real. To this end, all of the acting is excellent. From Quinton Aaron in the role of Byron, to Amy Pietz in the role of Beth, to sweet little Nicole Scimeca in the role of Julia, the actors all breathed life into their characters so convincingly that it seemed they were made for the roles.

As regarding plot, as I said, I am not a critic. The choices Caird made in his plot were his voice and vision, and he portrayed the story in the manner he wanted it portrayed. The movie goes deep and heavy, but I might have liked a little more complexity and range, even some longer scenes of light. The sparse dialogue felt true and honest, but I felt on occasion there may have been opportunity for a greater exploration of relationships. It also seemed Caird was hesitant to put his characters in too much danger, and he was quick to get them out of it. As well, some plot lines seemed a bit extraneous. These are valid choices—in no way do I want stories to be told inauthentically—but I suspect as Caird continues to write (as he absolutely should be encouraged to do), his characters and plots will also grow in depth.

This, too, made me think about the differences between Hollywood and indie films. Hollywood films follow very narrow constructs, but I wonder if indie films might start breaking these constraints. Halfway runs about an hour an forty-five minutes, fitting perfectly within the standard movie length. To fill out more of the plot, some of the visuals may have had to have been sacrificed, which would have been a great loss. Maybe as indie movies grow, filmmakers will begin to experiment more with structure, introducing us to new ways of storytelling—something which I think is an exciting prospect.

While I’m sure acting as both writer and director was exhausting, the benefit of having the writer also in the role of director was so evident in this film. The integrity of Caird’s vision was never compromised, and every choice contributed to making the whole greater than the sum of the parts. And again, I suspect this is something far more often afforded to independent films than the big budget films we’re used to.

If Halfway is representative of the future of indie movies, I am on board. Some of you may know that last year I decided to try writing a screenplay, both because I’m always trying to learn and grow as a writer, and because it seemed like an interesting challenge. In doing so, I did a ton of research into the industry (and have listened to every episode of John August and Craig Mazin’s fabulous and fascinating Scriptnotes podcast). Throughout everything I’ve read and learned, one thought that continues to come to mind is my prediction that the movie industry is on the verge of a very big disruption.

In my opinion, Hollywood studio executives and studios are dinosaurs that have painted themselves into a corner. What’s more, while in the corner, they’ve created the very meteor that will crash into them and ensure their extinction. Because the stakes have become so high—hundreds of millions of dollars per film!—there’s no room for risk or error, and that kind of culture can never lead to innovation or growth. I’m obviously no movie industry expert (as I’ve mentioned), but I predict—or at least hope—that the fears that have led the studios to so severely restrict their offerings will open up the space and audience interest for more independent filmmakers to create and present real stories again.

Because the fact is, we are not getting real stories from Hollywood anymore. We are getting special effects. Case in point: I am what I would consider an moderate or average Star Trek fan. I watched all of TNG and Voyager, some of TOS, never got into DS9, tried Enterprise and couldn’t get past the pilot. I saw that Star Trek Beyond was in theaters and thought, Why not? I watched, and it was certainly enjoyable enough but it felt like something was missing. What it felt like, truly, was that what little story it had was merely a platter on which all the spectacular visual effects were served.

To that end, I am thrilled to see that Caird and Paterson and all the others involved in this film have created a truly special film—and what’s more, that they show great promise for the future of independent film. These are people to watch. Put them on your radar. They have stories in them that need to be told, and I believe we need to hear them.

The challenge, of course, with anything independent, is getting the word out. So spread the word!

Halfway will be screening at the following times in the coming weeks: 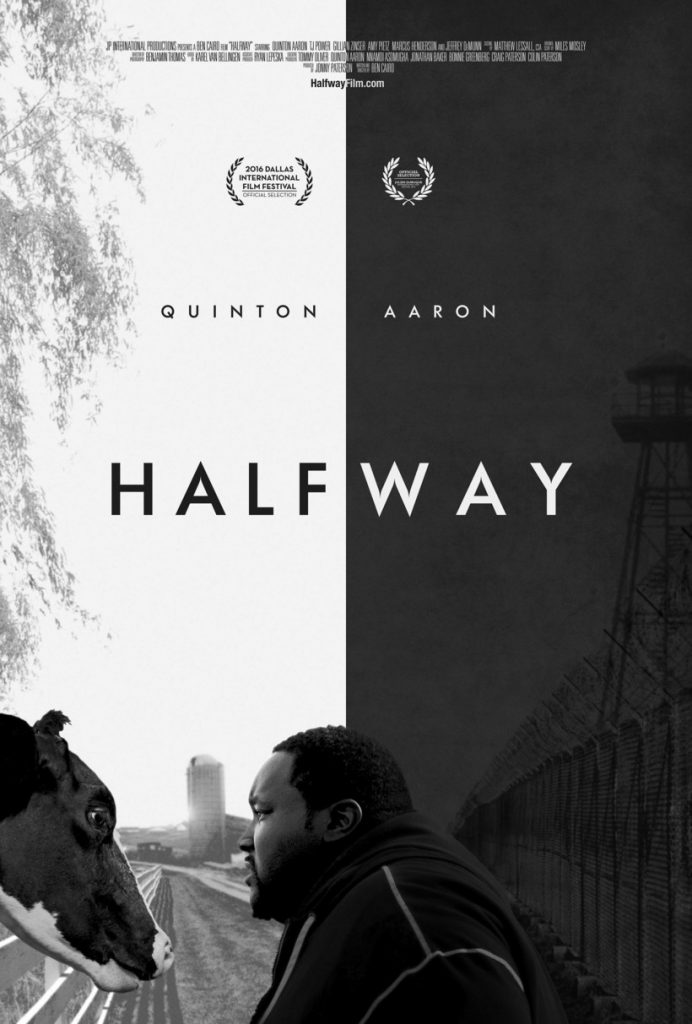